skip to main | skip to sidebar

Sonny Fincher is FAANEGA's new Relay for Life team leader. For this year, our association has a fundraising goal of $1,200. If you would like to donate to Relay for Life through FAANEGA, please give your check (payable to Relay for Life) to Sonny or any of the board members. FAANEGA will be participating at the Athens' Relay for Life activities on May 11, 2012 at the YMCA grounds. More details will be announced later.

Posted by FAANEGA at 7:00 PM No comments: 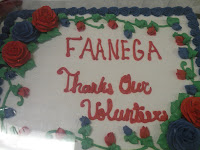 FAANEGA Thanks the 2011 Concession Stand Volunteers

Last February 18, 2012, FAANEGA hosted a potluck gathering to honor the 2011 concession stand volunteers who operated a stand during the UGA football home games. Our volunteers raised around $4,000 during the season donating their time and their skills. Funds raised will be used for FAANEGA's charitable activities.

Those who were generous with their time are the following (in alphabetical order):

During the party, a slide show of the pictures, showing the volunteers in action, was shown.

The Volunteer appreciation was a great success, thanks to the artistic talents of Frances Fincher (for transforming the St. Joseph Parish Hall into an elegant venue and for preparing most of the food) and Nattie Demesa (for leading the line dancing enjoyed by the attendees). Thanks also to Bunny and Raquel Hilario (for providing the sound system), to Gigi Magsalin (for helping in the preparations), Sonny Fincher and Cesar Escalante (for bringing most of the party items in the Parish Hall).

A big thank you as well to those who attended the party. Your support to the volunteers and to our association is very much appreciated.

Posted by FAANEGA at 6:50 PM No comments:

FAANEGA
We are Filipinos, Americans, and other ethnic groups residing in northeastern counties of the state of Georgia.